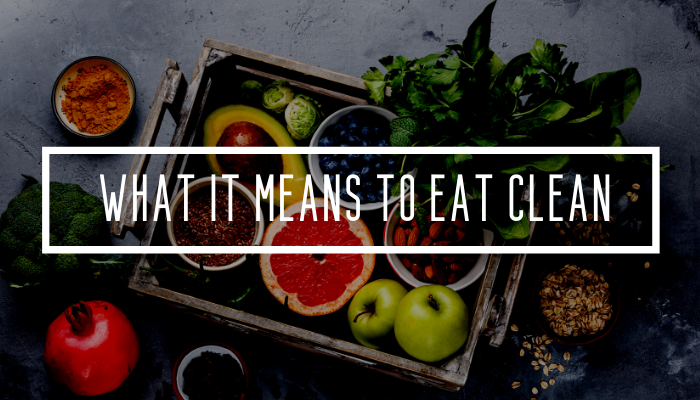 What Does it Really Mean to Eat Clean?

What does it really mean to eat clean? Do you have to go Paleo? Do you have to stick with organic products or eat a plant-based diet? Do you need to wash your vegetables better?

Eating clean is less complicated than you think. But actually eating clean may require you to modify everything that you’ve learned about what food really is.

What Is Real Food?

Eating clean involves eating real food; in other words, meats, vegetables, nuts and other items that are minimally processed between the time that it’s produced and placed on the grocery shelves.

Most of what you find in the center aisles of the grocery store is edible, but it’s not real food. It is often dramatically modified from its original state and loaded with chemicals and additives.

For example, some macaroni and cheese products are labeled as containing “real cheese.” But how did that cheese get from the cow into a powdered form in a tiny package?

When you eat clean, you consume the most natural form of a product as possible.

Cheese that comes from real milk and has been produced via a conventional aging process is cleaner than American cheese slices, which contain a plethora of added ingredients to make it flexible and malleable.

That’s just one example. You can make sure that you eat clean by following some of the tips below.

Eat Outside of the Package

You often hear that you should eat non-packaged foods if you’re trying to eat clean. But that can be confusing. Raw nuts are packaged to contain them for shipping and sales purposes. Many vegetables can be packaged to make them more convenient for shoppers. Items like peanut butter and salad dressings are always packaged. So what is the true meaning?

For example, a jar of clean peanut butter should be made of only peanuts and salt. Some peanut butters have ingredients such as corn syrup solids, soy protein and mono and diglycerides. If you can’t pronounce an ingredient, it’s probably not a clean food.

Frozen vegetables come in a package, too, and you shouldn’t avoid those. They have more nutritional value than canned vegetables, which are often packed with sodium and preservatives.

If you do eat packaged foods, check the labels. Chemicals are hidden in all kinds of food, including bread, nuts and dried fruit. Just because it looks like it’s good for you, it doesn’t mean that it is.

Make Your Own Meals

Some items that are marketed as health foods are not healthy at all.

Some frozen dinners are laden with chemicals. Condiments may be tasty, but many of them are incredibly processed and have little nutritional value.

One of the best ways to eat clean is to make your own foods or order meals that specifically adhere to cleaning eating rules and are transparent with what ingredients and food technology they use.

Sugar, salt and fat taste good. That’s why they’re often added to meals, be it at restaurants or what you buy at supermarkets.

But you might get more than you bargained for. Lots of packaged items have far more sodium than you need. Sugar is disguised in many forms, such as anhydrous dextrose and high-fructose corn syrup. Hydrogenated fats have gone through extensive processing and increase the risk of certain diseases.

Should You Eat Organic?

With so many people talking about clean eating, you might have trouble keeping up.

For example, you may have a friend who won’t eat meat unless it’s raised humanely from a local farm. Some people consider foods that are grown with pesticides to be unclean.

Certified 100-percent organic foods tend to be cleaner than non-organics because they’re not allowed to be genetically modified. They aren’t grown with pesticides, they’re minimally processed and they don’t contain artificial ingredients. Eating organic will limit your intake of chemicals.

Ultimately, your definition of clean eating is a personal one. If you’d like to avoid harmful chemicals, choosing organic foods is a great option. But it can be expensive. When you can’t do that, eating a variety of foods that are rich in nutrients and in their natural state is the way to go.