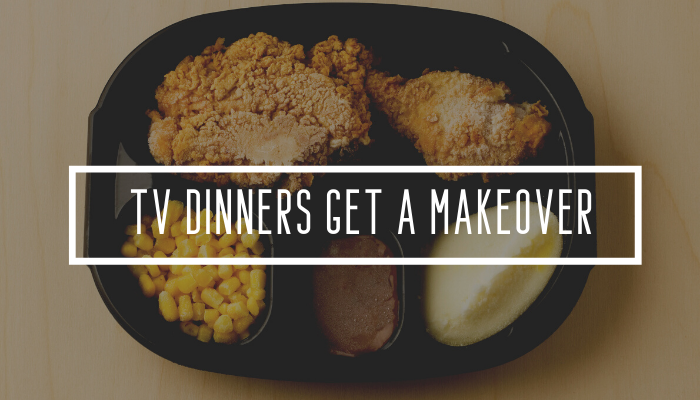 TV Style Frozen Dinners Got A Much Needed Makeover

Manufacturers have tried all manner of foods, flavors, and gimmicks to make them both taste better and be more nutritious, particularly during the 21st century.

They have met with varying degrees of success. The latest innovation is that companies are now delivering healthy, fine-tasting, frozen dinners to your home. So, when you’re sick of pizza delivery, you can sample these newfangled dinners!

What Makes These TV Dinners Different?

Flash freezing has become high-tech in 2019. Frozen foods in the grocery store have gotten tastier and healthier, too, but with these new, deliverable frozen dinners, you don’t have to schlep down to the grocery store to shop.

The newest flash freezers are the 3-D Flash Freezers. They use high-speed, cold, circulated air to hit the items to be frozen from all angles simultaneously.

This freezes items so quickly that there is no need to cool them beforehand, and the items to be frozen can be at a temperature of up to 90 C. This technique freezes the items in fewer than 20 minutes and guarantees that they will look fresh and new when cooked.

One of the drawbacks of regular freezing is that nutrients are lost in the process because the water crystals are drawn out of the frozen items.

Flash freezing keeps the nutrients inside the food so that you get the most benefit. The flash-frozen TV Dinners of these delivery companies aren’t what you’d expect either.

In many cases, the vegetables are the central course of the meal.

By using vegetables as the “star of the show,” these companies deliver high protein and fiber without relying on “mystery sauce” to create flavor.

Of course, meat is still included in some meals, but when vegetables get their due, the entire meal is scrumptious instead of just one part.

Aside from being healthier, these dinners are also more satisfying and filling.

If a TV Dinner is just “empty calories,” no matter how big it is, you’ll be hungry later and eat more.

Most of the time, it would be something similar, which also wouldn’t fill you up, and the unhealthy cycle would continue. One bistroMD dinner, despite being smaller than many other brands, will kill the hunger pangs and taste divine at the same time.

Another way these flash-frozen, super-fresh meals are different than the standard TV Dinner fare is that they don’t use preservatives.

With advanced flash freezing, preservatives aren’t necessary. The food, therefore, is pure, loaded with flavor and nutrients, and fully satisfying. What’s not to like?

Some companies, however, don’t even flash freeze their meals at all, despite the advances.

Kettlebell Kitchen, a company that provides Whole30 meals,  is one such example. They prefer to make their meals and deliver them using dry ice or other methods to keep them cold. They chill them beforehand, of course, but they then get them out for delivery right away.

Although these meals aren’t like grocery delivery services that deliver fresh foods or like restaurant deliveries that occur in an hour or less, Kettlebell Kitchen’s method is as valid as others’ who use flash freezing because they use superlative foods and tried-and-true “keep cool” strategies that last even if deliveries are from one state to the other.

What’s Actually in These TV-Style Dinners?

It’s all well and good to speak in generalities, but let’s get down to specifics now.

Even those who love pasta can satisfy their cravings with a variety of dishes that taste as good as they look.

Freshly also varies the proteins in its dishes and focuses on fish, beef, chicken, pork, turkey, and vegetable sources in equal measure. They give their foods an earthy texture and flavor with a variety of mushroom-based options too.

Then there’s Magic Kitchen, who strives to emulate “dinner at Grandma’s” though a smorgasbord of “down-home” options that includes chicken and rice vegetable soup, beef pot roast with red-wine sauce over noodles, carrots, and green beans, and even cinnamon raisin bread pudding with caramel rum sauce.

Magic Kitchen also tailors some of its offerings for seniors who may not like the same portion sizes as younger folks. They also offer bundle discounts for families in addition to “meals for one.”

Diet-To-Go may sound like it’s all about “rabbit food,” but it’s not. The company’s focus is on an overall lifestyle change regarding people’s relationship to food.

They provide four menus from which people can select their meals: balanced, keto, diabetes, and vegetarian.

Each group is peppered with protein-rich options and is crafted specifically for the people who select it. For example, the balanced group focuses on calories in/calories out and controls carbohydrates and cholesterol.

The keto group limits carbohydrates even further, often as few as 30 per day, and puts fatty proteins in their place. The vegetarian menu includes dairy and eggs as proteins, so lacto or ovo vegetarians will be able to find menu choices from “the other side” that fit their preferences.

Home Bistro allows total customization not only in what you get but also in how much you get. The company’s philosophy is to make it easier for people to afford better meals and more nutritious food.

If someone can’t afford $12 a meal, for example, the company allows the person to order $9 worth of healthier food. The company offers many categories from which to choose. If you want to get in touch with your hunter-gatherer roots, for example, you can pick a paleo diet rich in fish, lean meats, and fruits.

BistroMD has everything going for it: taste, appearance, nutrition, ease of use, and terrific customer service. It’s not just us saying this either.

They categorize their meals by nutritional needs in multiple groups, including genetic men and women of differing ages, those looking to lose weight, those looking to maintain weight, and even those who suffer from a variety of conditions that require specific diets.

Here’s the kicker: If you need something they don’t offer, they will let you call them up and customize what you need. This would be perfect for someone on dialysis who can have potatoes and carrots only if they’ve been leached and parboiled beforehand, for example. As well, people with dietary allergies can still enjoy dishes they usually couldn’t by calling in and having them modified to their personal needs.

All of bistroMD’s meals are designed by physicians, including the customized ones, but as the company is fond of saying, “They taste like regular food, not hospital food!”

The variety is, quite simply, astounding. There are breakfast, lunch, and dinner options for every plan, and each plan also includes healthy snacks that will quell hunger pangs without “upsetting the nutrition apple cart,” so to speak.

Where else can you get chocolate gelato or chili chips as healthy snacks? Vegetarians can select robust and earthy lentil creations, and those who were carnivorous dinosaurs in a previous life can enjoy sausages, meatballs, various cutlets, and even sloppy joes!

While all of these services are not cheap, neither are they outrageously priced. A week’s worth of meals costs between $100 and $150 for about a meal and a snack a day. That’s between roughly $14 and $21 a day. Lately, that’s the same price as hitting a drive-through at a fast-food joint. Diet-To-Go gives slightly more per dollar than the others because it includes sides and condiments in the price.

Home deliveries for meals are a fairly new innovation. The first companies, which include bistroMD and Diet-To-Go have been around a little more than 20 years.

That doesn’t mean that the others aren’t worth a look, too, however.

No matter which of these companies you select, the convenience simply cannot be beat. In a world where both parents must work to make ends meet, having a top-quality set of meals delivered for the family is no longer an indulgence.

Instead, it’s almost a necessity for a member of the rat race’s mental health. The benefits to your physical health are substantial, too, as balanced, correct nutrition supports everything in your body from heart health to endocrine function.

It’ll be nice to have a personal chef, won’t it?